The main character of my first book, Wander, changed a ton since she was first thought up.

Just to show the surface value of the change, to the left, I posted a doodle similar to those I drew in early high school of her and her mysterious little companion. They certainly have come a  long way if you compare this doodle to the amazing cover that artist Jaka Prawira drew for the book.

The characters I am most attached to are the ones that are loosely based off of dreams I have had (these would include Wander, Under, and Masu.) While some are people I have met in the dream (Masu), there are those that were more based off of the feelings the dream(s) gave me (Wander and Under.)

Wander was a character first inspired by loneliness. Everything about her design was to push others away, from her cloak that hid her identity to a sword for fighting. The fox was there, but it more omen-like than a creature of companionship. I did not yet know why but I felt that in a way, it too was a piece of the Wander character to push others away.

Being an angsty teenager when I first thought up of Wander, she was actually similar to a self-insert character at first. I liked to imagine her as a being to place myself in in order to cope with my feelings. However, all this changed when I literally set her on fire. I gave her a tangible reason to wear the cloak, and an identity and set her very far apart from me.

I thought of wind-borns. They are people who come into the world with no 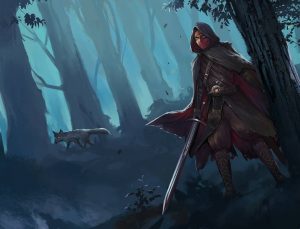 family or way to survive on their own. I decided Wander would be wind-born and that dictated her entire personality to be unique. She was a product of her situation and environment. Like most kids, she had a natural curiosity and a lot of love to give but the world was cruel to her. Still, that did not make her utterly hardened either. I wanted to keep her soft since that was a part of her that was so endearing to me, but I wanted to give her an edge as well.

An interesting tidbit is that when I first laid eyes on the cover I thought to myself, “That’s not Wander,” because in my mind she was beautiful and sweet. Then I realized, that meant the cover was perfect.  Wander does not see herself when she looks in the mirror either. That’s why she covers herself. It also brought to mind that there are no burned women in media. Only men. Female characters are too much built for the male gaze, and Wander will definitely not stand among those. In fact, I’m sure a lot of people see her on the cover and think she’s a man. It’s a fun play on expectations since Wander looks one way on the outside but is a scared little girl on the inside.

Through guardians and magic, I also found a way to literally make the fox a part of her. I always felt like it was a part of her. It did really excite me too, because I dislike animal companions that exist just to be cute. I wanted to take that trope and drive it into oblivion by making the twist where the fox is a complex plot machine. Even better, that it could be seen as a possible villain character by some readers. I love nature, but I like to romanticize the scary as well as the beautiful in it. One of the most scary things about it is that in reality, we are destroying ourselves by destroying it. The fox is a symbol of that through it’s mindless revenge. It also shows that nature is a part of you, for better or worse, as seen as it’s relationship with Wander. I wanted to make it symbolic of nature without sounding preachy, because way too much media does that.

Besides the fox and her curiosity, a major factor in Wander’s driving force is Masu. He was a character in my head that existed in a separate part of my mind from her. But when I put the two together, they hit it off. Masu was mature but also had little knowledge about himself and the world, so he was like a big-brother figure. I knew they were meant to be in the same story once I put the two together.

That’s about all I have to say about Wander’s creation.

If you have any questions or want me to write about something specific, email me at theaweiseries@gmail.com