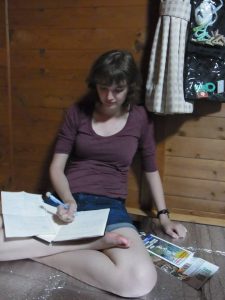 Early on, I did not always want to write books or create worlds. Instead I loved to pretend I was in them. To make a decent world, you would have to recognize your own. I didn’t want that. I wanted to play. I wanted to be a student at Hogwarts or a fellow rabbit in Watership Down. So as a little girl, I wanted to be an actor. I could shapeshift for a living.

In middle school though, I changed my mind. I discovered fanfiction. Yes yes, laugh. It’s not like your first thought will be to the famous fanfictions like Paradise Lost or Dante’s Inferno. Fanfiction today is far less Biblical. However, it was my gateway and I am not ashamed to admit it.

I was lucky enough to gain a loyal following with my online fanfic writing. The writing was absolutely horrendous compared to my writing today, but people loved it none-the-less. As much as I would like to tell my readers that I did not care what people thought of my writing back then, that would be a lie. Like any young teenager, I needed validation and I got it through fanfic writing. That community is part of what made me the far more confident writer that I am today.

Of course classes helped. Though, admittedly, I was never much of a reader. I know, that is possibly the worst piece of information for a writer to say. I just would get far too distracted in a page that was not my own. Maybe I am just selfish and need the worlds to be mine.

Speaking of selfish, I did not join creative writing groups. I did not like being among other creative writers. Some of them I admired, but I was too needlessly competitive.

By my later teen years, I really wanted to write a book. However, I had dozens of ideas. By early college, I wrote an entire book and now it’s in a closet or under a bed somewhere because I decided I was not ready and it was going nowhere. What drove me insane was that I was young and I knew that it probably will not be until I am on my deathbed that I am at my peak in writing form. It’s the opposite of being an athlete in terms of when your peak is. So I was afraid of publishing too young and looking like a fool. Like I said before, I was never much of a reader, and that alone severely debilitated me in comparison to other young writers. I was stubborn too, I wanted to succeed but I wanted to do it in my own Allison way.

By the end of college, I started writing what would become Wander. I was an English major, so I convinced myself that I finally had the minimum amount of tools required to confidently move forward in publishing my own book. (Professors, if you are reading, I want to thank you for making me read so much).

In short, that’s how I began writing in general. The main focus should be on the fanfiction though. That’s really what did it for me and I am happy to talk about it more. Based off my own experience, I think it’s a gateway to give youth a love of writing and story-telling.

When I taught some creative writing courses in Cochabamba, Bolivia, I mentioned this idea to teachers. One raised her hand and mentioned hating fanfiction because it was stealing ideas from stories already made. To that, I told her it’s fine as long as you are not making money off of it. Even then, there are works today that started off as fanfiction such as 50 Shades of Grey (never read it, never plan to) that are popular and changed enough to become their own story. Besides, fanfiction worked as a crutch for my younger self. It was never meant to be permanent. It was a way to experiment while also getting public attention.

And I did get positive public attention. Fanart, fanfiction based off mine, and fanmail. This was on Quizilla too, a website that is now non-existent so all that is now gone except for some memorabilia I printed out. The constant positive feedback was addicting. By the way, this was all about 13 years ago.

The strangest thing? My most recent contact with a fan of my fanfiction was in 2017. They somehow remembered my fanfiction and found it again on a

website I will not name (you are not reading it!). They wrote a message that they remembered it from 13 years ago and went looking for it again. This was jaw-dropping for me, who was trying to get Wander published at the time. It made me wonder if the height of my writing career was writing casual fanfiction as a preteen for other preteens. Will Wander get as much attention? For my own sanity, I will not delve too deep into that paranoia.

Another big reason for why I write is that the ideas already exist in my head anyway. But that deserves a blog post of it’s own.

So that’s it! If you have any questions about my story, feel free to email me at theaweiseries@gmail.com